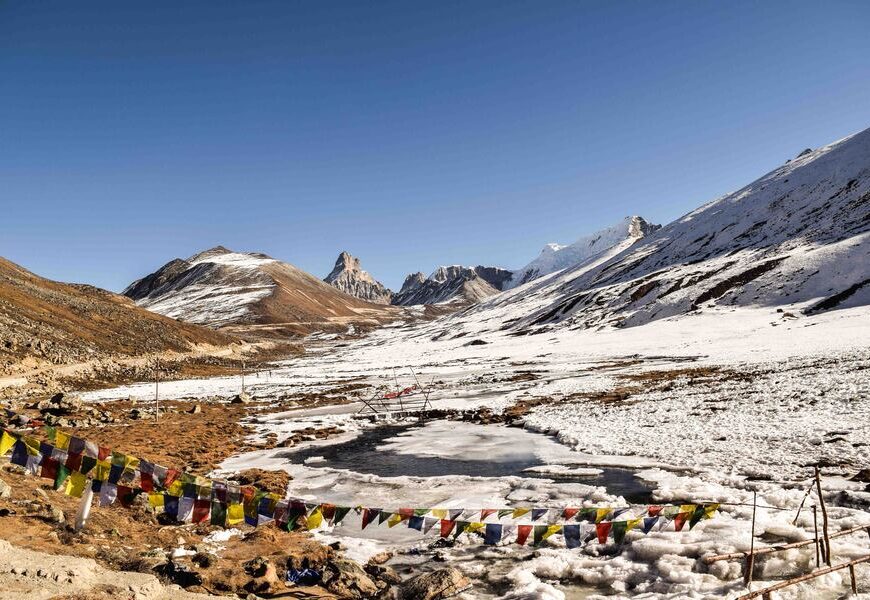 I could not visit the Yumthang valley when I came to Sikkim six years back. That thought lingered somewhere, and that wish to be here in a magical valley strewn with zillions of wildflowers swinging and swaying along a gorgeous riverside, remained. And while I didn’t make it in the spring which is touted as the best time to be here, my visit was an opportune time to be welcomed by breath-taking views of azure blue skies, snow-capped mountains, yaks grazing on the meadows, fluttering prayers flags, and tall alpine forests. I did miss the Rhododendrons, but the views of the Yumthang valley compensated for the fleeting thoughts of not having pictured the postcard-perfect pictures. And then a little detour to the Zero point proved a splendid perfection desired.

We had started early from Gangtok to the Lachung village which was to be our base to the Yumthang valley. The drive was surreal through wooded lands, crossing numerous springs, the deep curves on the roads and scattered villages situated on each side of the road, some giggling kids waving at us, and a row of vehicles all having the same destinations. There were no stoppages except when we had to be stranded for almost an hour because of a traveler rush at one of the waterfalls on the way. I took that opportunity for a detour, exploring the village life and the pretty homes on the sides. There was a stair that led uphill, and a rush of adrenaline and curiosity nudged me to take the untraversed path. The stairs going through the woods almost seemed to lead me nowhere. Catching breaths as I climbed I went on, just in hope that stairs had to be a doorway to some land. Soon an open space came – the stairs had led to a tea plantation just like the ones I had seen in Temi on way to Revangla. Surreal. The beauty that any word would fail to describe.

We continued passing from one picture-perfect village to the other, halting for some food or tea. Our major stop was at the Teesta bridge to capture the elegance of the Teesta River glowing in its emerald green hue. We crossed the beatifically set Mangan town, another major head in North Sikkim. The journey was exquisite from then. The grace of nature bestowed on Sikkim was quite evident. Another two hours of drive and we came to the Chumthang village. From Chumthang two roads cut, one towards the Lachen village, and the other towards the Lachung. We were off to Lachung. The night had set by then and the temperature dipped as we ascended to higher altitude. As we moved, we crossed the Bitchu Bridge, and just a few meters ahead a gate awaited with the words ‘Welcome to Lachung’ written bold and bright on its arch. By late evening we entered the Lachung village, a village nestled on the banks of the Lachung Chu river.

In its first look itself, Lachung looked like a quintessential Sikkimese town. The houses gave a lot to the lives of the people residing inside them. The entrance doors of these little but beautiful houses were covered with a Lungta or curtain featuring Tibetan designs and patterns and the most common images of Tibetan deities. The fences of their balconies had gorgeous flowery plants lined up in a row, and logs of wood stocked outside for winter use. We decided to take a walk up to the Lachung monastery. And every five steps you would cross a sign of a homestay or a resort. Some small inns or chai places were open. Some souvenirs and essential shops were another regular sight. But in our walk, we hardly came across more than ten people in total.

The next morning was reserved for Yumthang valley and the Zero point. The temperatures dipped to sub-zero in the night. With layers of clothes, we started early morning at six. That was the time to capture the real beauty of Lachung. The village is set amidst tall mountains overlooking it as some angelic guardian.

A morning tea and some snacks and we set off on our journey to the Zero point. We left at 7 am for Shingba, which was our first destination for the day. After driving through the fairy-tale landscape of the sanctuary, one reaches Yumthang valley. We decided not to stay there and continue our ascent to Zero Point. We thought it prudent to first cover the Zero point, make it back in the valley in time, and then spend as much time getting drenched in the serene environs of this gem of a valley.

As we ascended the landscape kept changing. Soon we were above the tree line, and all we could see were Rhododendrons. I wondered how splendid it would look in the Spring when these shrubs are blossoming. We were blessed with amazing views of snow-covered peaks as you drive along with myriad rhododendron trees. The Yumthang Chu river meanders through the sanctuary adding to the beauty of the breath-taking landscape. A land to more than 40 species of rhododendron shrubs, along with other trees including poppies, aconites, gentians, potentillas among many others, the valley is nature’s garden in its right spirit, and thus rightly called a ‘valley of flowers’. And just then we crossed some yaks grazing merrily on the sides. That was Sikkim calling out to us.

There was a child-like glee on my face seeing that abundance and a feeling of abandon in the air. As we ascended the excitement grew. The mountains that once seemed distant were near, or rather we were crossing through them. The whites of the mountains looked more colorful than anything ever before. The air was sharp and piercing, but it also carried an other-worldly whiff. The gorgeous yellow snake bark maple trees that had followed us all along as we drove through the fantastic curves and deadly hairpin bends were gone and carpets of red moss beautifully decorated the roadside. The azure blue sky seemed close, and the floating clouds kissed the snow-capped mountains. Some more turns and the shrubs disappeared – there was nothing but grey rocks oft-covered with snow. Throughout the journey we crossed many Buddhist flags fluttering with the sharp chilly wind, spreading the message of peace far beyond.

And finally, you will be at Zero Point bustling with tourists. On the left of the Zero Point stands the souring Dongkila Peak, while to its left is the Khargula Peak. We took a peg of Old Monk to keep us warm, rented out the boots, and set off to uncover the Zero point. The international border with China is at a shouting distance from here. The brilliant landscape was worth all the journey. The area remains covered with thick snow most times of the season, which is why tourists flock to it in droves.

We spent almost one and a half hours there, and then made our way to the Yumthang valley through that narrow, rugged roads, stopping in our way to capture the unblemished beauty of the place. Prayer flags were adding to the beauty of the landscape. Against some prayer flags, people have used small stones in odd numbers (3 stones or 7 stones) to create little chodins and tied khada on them to make a wish. As said they need to come back to pay respects if their wish comes true.

As we drove downhill the landscape changed faster. The red algae-strewn rocks made way for shrubs and occasional trees. But the silence of the place was embalming. One-hour drive and we reached the Yumthang valley, a vast piece of land stretched between the mountain ranges with a river cutting from the middle. It was a sight to behold. Tall mountain peaks covered with pine trees stood proud on the other side and the yaks grazed merrily in grassy plains with the bells around their necks chiming in absolute rhythm with the gushing mountain breeze.

The valley is situated at the ‘tree-line’ which means no trees are found above the valley. In spring the valley turns into a collage of colorful flowers. In monsoon, numerous wildflowers like louseworts, cobra-lilies, cinquefoil, and primroses bloom and turn the valley into a flowery carpet. On the other side of the river stands a forest of Pine and Silver firs. Along the river stand rows of white prayer flags unfurled at straight bamboo shoots.

Yumthang valley looked to be a place where you can spend hours doing absolutely nothing. Long, quiet walks or just sit in that verdant carpet, admiring the clear blue sky, soaking in the fresh winds that caress you, immersing yourself in the calmness of the surroundings.

After spending almost an hour in the Yumtang valley we headed to the Yumthang Hot Spring to experience a profound sense of isolation. It’s a little distance from the valley, where a hiker’s path leads to a pedestrian bridge lined with prayer flags. The bridge takes you to the hot spring hidden in a brown wooden house towards the right side of the bridge. We headed back to Lachung after that quick detour. A light lunch packed with memories and some souvenirs we started towards Gangtok. A six hours journey with just one stop for tea and snacks, and we were back in the city. I breathed in the city air, the whiff of the valley was missing. I looked back at the road that took us to Lachung, feeling satisfied that the journey I couldn’t take six years back because of the bad weather was now complete. 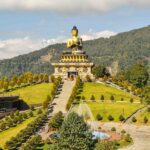 Previous Story
Sikkim secrets: Learning to slow down in Kewzing
→ 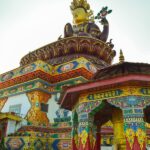 Next Story
The pristine Pelling 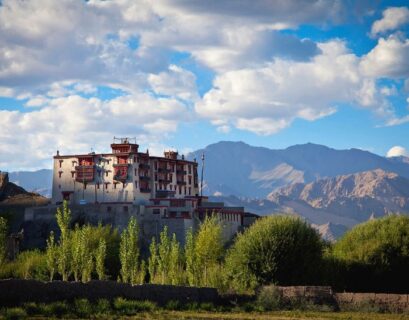 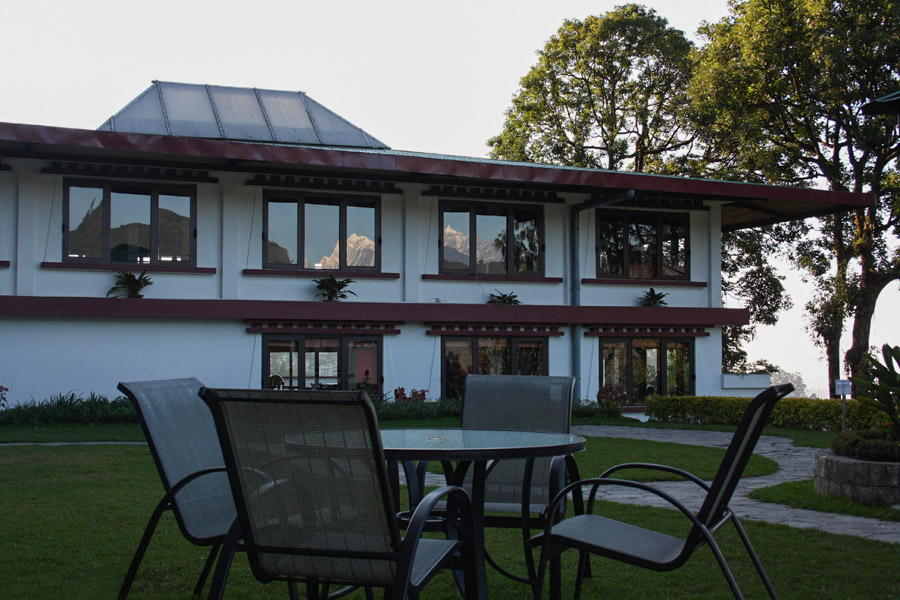 Magical sunrise and a feast at Denzong Regency

The worst part of Sikkim is the tiring journey from Bagdogra airport to Gangtok. And while all along our way one is accompanied by the...
Read More → 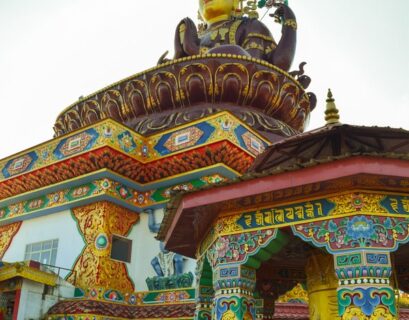 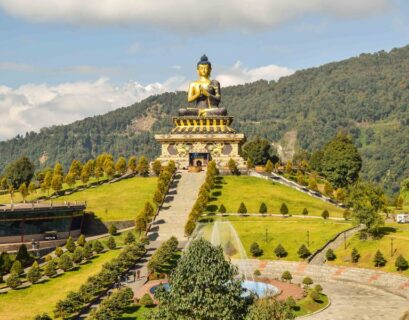